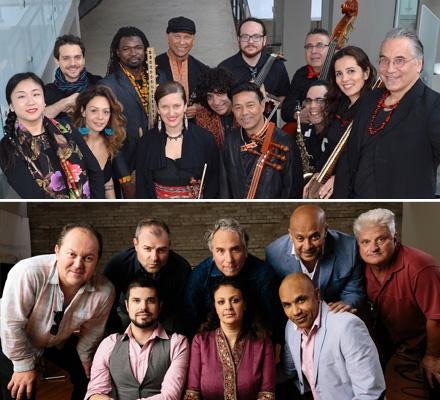 Where: Koerner Hall, 273 Bloor St W
When: April 7, 2018 at 8pm
Cost: Tickets are from $35-$70 and can be purchased at www.rcmusic.com. Part of the World Music Concerts series. Series subscription starts at only $260.25 or mix with concerts from other series to create your own package.

Details: KUNÉ (“together” in Esperanto), an ensemble that looks and sounds like Canada today, features top-notch musicians from all over the world now living in Canada. The members perform music which they wrote together and which can, arguably, only be created in Toronto, on instruments from many corners of the globe. Created by The Royal Conservatory in 2017, the group was originally called the New Canadian Global Music Orchestra and is now known as KUNÉ – Canada’s Global Orchestra. At this special concert, KUNÉ launches their debut, self-titled recording with Universal Music.

In addition to their global partnership signing with Universal Music Canada, KUNÉ  have also been signed by one of the leading arts management firms in the world,  Opus 3 Artists, who manage artists such as Yo-Yo Ma and his Silk Road Project, pianists Emanuel Ax and Daniil Trifonov, Rosanne Cash, Béla Fleck, Branford Marsalis, and the late Hugh Masekela, all of whom have appeared in Koerner Hall.