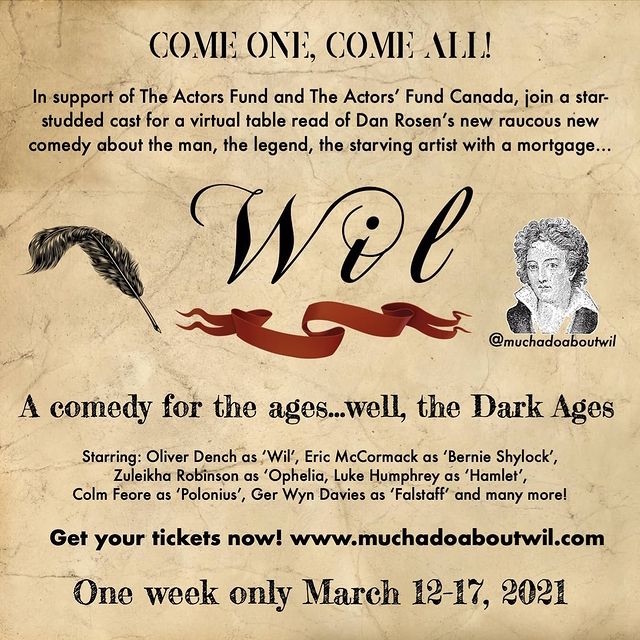 Where: Online at www.muchadoaboutwil.com
When: March 12-17, 2021 **Change of Dates! Streaming now from March 19-23, 2021**
Cost: Tickets are available here www.muchadoaboutwil.com/tickets-donations. There is no admission fee, but audience members are encouraged to make donations to The Actors Fund and The AFC (the Actors’ Fund of Canada).

Details: A virtual reading of “Wil” is a new feature project written by Dan Rosen (writer of “The Last Supper” and writer/director of “Dead Man’s Curve,” both Sundance Festival films) benefiting The Actors Fund and The AFC (The Actors Fund of Canada). The reading of Rosen’s screenplay will be produced by Richard Middleton and Kelly McCall.  In addition, Sara Botsford will direct and co-produce, and Christopher (CB) Brown will stage manage and co-produce. Rosen is also set to produce.

Set in 1590, “Wil” introduces us to 26-year-old Wil Shakespeare – a promising, but floundering playwright with a wife, three children, a ballooning mortgage and a new play that just closed on opening night at the Stratford-Upon-Avon Supper Theater. Things look bleak until Wil’s trusted agent, Bernie Shylock, lands Wil his first professional gig – running the summer stock theatre program at Elsinore Castle in Denmark. Upon arrival in Denmark, and ready to work out his new play, “Romeo & Juliet,” Wil finds instead the royal Hamlet clan under siege by thieves and murderers looking to overthrow the kingdom, and he realizes that putting on a respectable performance of the world’s greatest doomed romance might be the least of his worries.