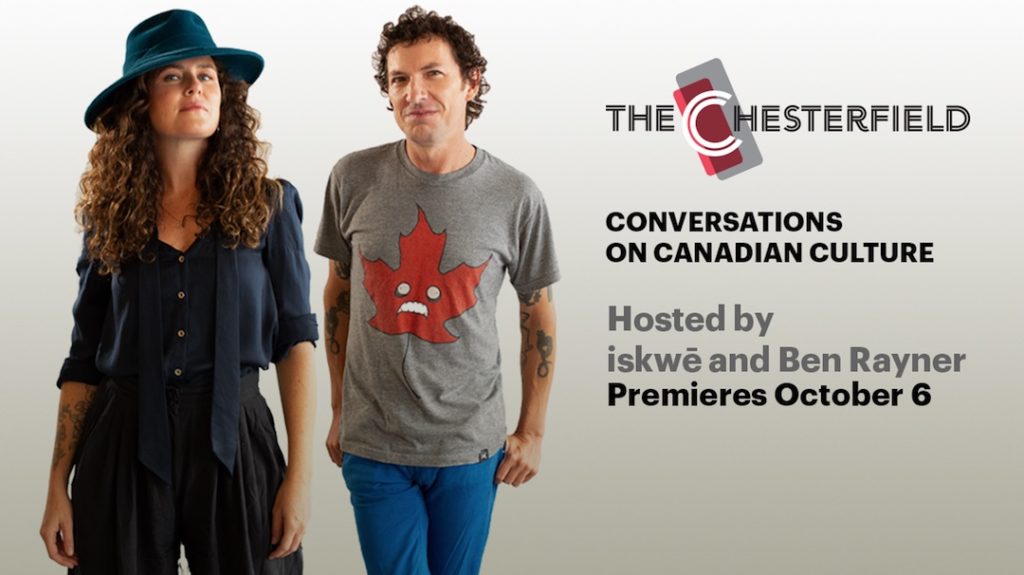 Details: Friends of Canadian Broadcasting is pleased to announce The Chesterfield, a new video interview series about Canadian culture where notable Canadian artists reveal the Canadian art that inspires them. Hosted by songwriter and performance artist iskwē, and entertainment journalist Ben Rayner, The Chesterfield will premiere Tuesday, October 6, 2020 on YouTube and run weekly for 12 episodes. Watch the official teaser video here.

In each 15-minute episode of The Chesterfield, guests will discuss their favourite book, film, record, painting or other Canadian creation and discuss the importance of appreciating our own Canadian culture. When watching The Chesterfield, audiences can look forward to diving into the role of Canadian arts in national identity by examining such diverse influential Canadian works as CBC TV’s Kids in the Hall, Cherie Dimaline’s novel The Marrow Thieves, Maestro Fresh-Wes’ “Let Your Backbone Slide” and David Blackwood’s painting Cape Spear.

Friends of Canadian Broadcasting has commissioned The Chesterfield as part of its ongoing advocacy on behalf of Canadians who recognize the importance of telling our own stories. These conversations about Canadian culture will reinforce Friends’ fight for a strong public broadcaster and media now, and into the future.

iskwē is a songwriter, performance artist and activist originally from Winnipeg, now based in Hamilton and Montreal. A nominee for the Juno Awards and Polaris Music Prize, and regular performer at festivals across the country, when the pandemic lockdown hit she created “Live from my Living Room” on her Instagram – a series of conversations with such Canadian talent as Jann Arden, Strombo and Lights. A multi-disciplinary artist of Cree and Métis descent, iskwē will present the diversity of Canadian art, from film and music to comedy and dance.

Ben Rayner is a veteran newspaper journalist specializing in music and popular culture who just retired from a twenty+ year career as the staff critic at The Toronto Star. Born in England to two reporter parents, he grew up in Newfoundland and New Brunswick, graduated from Carleton University’s journalism program, and has been roaming the country in search of his next favourite band ever since. Beyond music, Ben’s obsessions include theoretical physics, horror films and UFOs. Expect the unexpected.