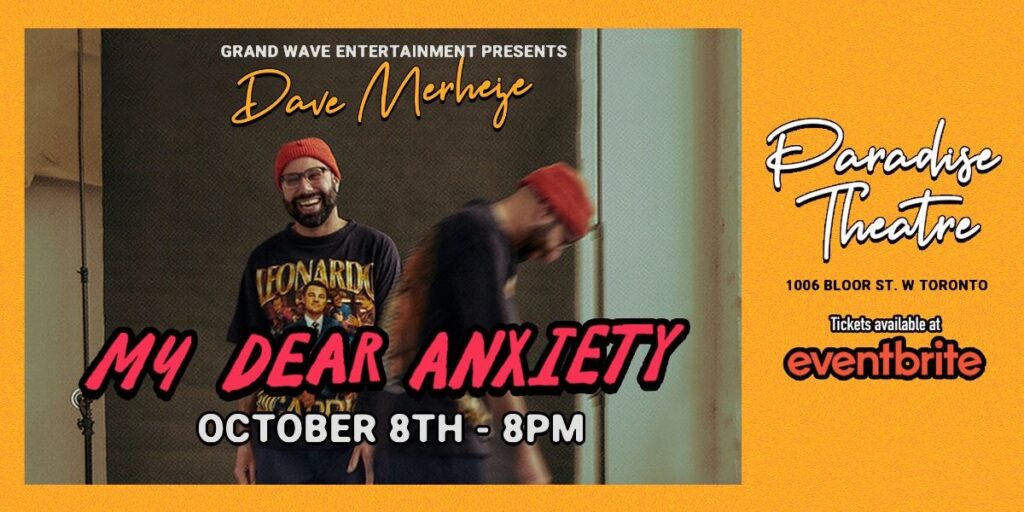 Details: Lebanese comedian and rising star Dave Merheje will be performing his new live comedy show My Dear Anxiety. This highly anticipated live show covers topics about being Arab, mental health and and his relationship with family and their personal and shared experiences with anxiety. Will also feature Dave’s famous frenetic style recounting his trip to Lebanon for the first time at the age of 42.

Dave Merheje plays the recurring role of Ahmed on the award winning comedy series Ramy on Hulu, with season three premiering September 30. Dave recently premiered his hour long stand up comedy special I Love You Habibi on Crave and he co-stars alongside Daisy Ridley in the upcoming feature Sometimes I Think About Dying, directed by Rachel Lambert.

As a stand up, Dave Merheje has made multiple appearances at Just For Laughs Festival, JFL42, Winnipeg Comedy Festival, the Halifax Comedy Festival, the Melbourne International Comedy Festival and he tours regularly. In 2018 Dave released Good Friend Bad Grammar, which won the 2019 Juno Award for Comedy Album of the Year. His comedy special Beautifully Manic can be seen on Netflix as part of Comedians of the World.