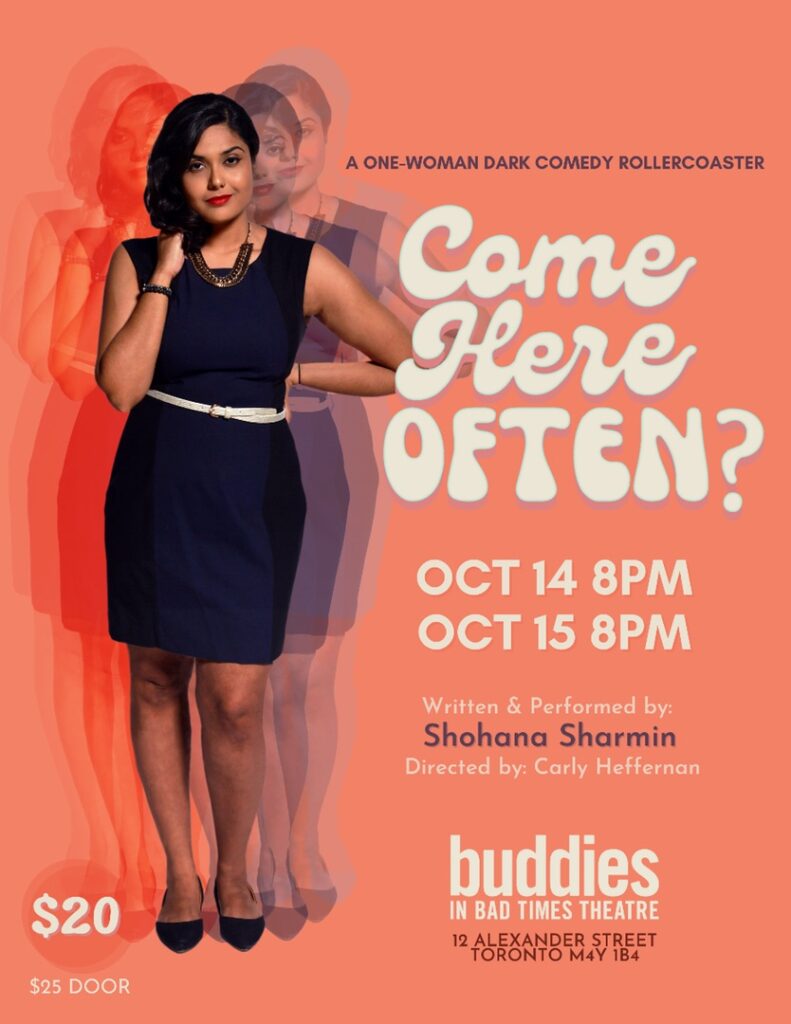 Where: Buddies in Bad Times Theatre, Cabaret Space, 12 Alexander Street
When: October 14 & 15, 2022 @8pm
Cost: Tickets are $20 in advance, $25 at the door plus fees and can be purchased at tickets.buddiesinbadtimes.com

Shohana doesn’t date much and there’s a reason for that. In Come Here Often? she travels through her own memories to moments in her life when she split herself in two – the divide between being Bangladeshi enough or Canadian enough, the forever tumultuous relationship between her body vs. her mind, or being straight vs. queer – and examines the ways she has tried to keep all those parts of her alive. Oh… and did we mention this all happens at a speed dating night?

Starting at age 7, Shohana learned to divide herself into smaller parts. Being a bicultural, bilingual, bisexual in a world that constantly wanted her to fit into one box felt like too much. She spent countless nights wondering how to make sense of the hard parts of her story: the years of abuse, the eating disorder, the physical, emotional and cultural alienation; and the struggle to belong and feel at home as an immigrant, and how to make these parts of herself “palatable” to her peers. Then one day, she started compartmentalizing – creating neat little boxes within herself to “fit in” and make sense of her own existence.

Come Here Often?, directed by Carly Heffernan (The Second City’s  She The People), is a feminist show driven by a soft shade of femme rage – one in which audiences see a woman, who has always tried to follow the rules and fit in, slowly begin to question and unravel the ideals she was taught to chase. The production deals with the difficult parts of existing in this world as a woman with maturity and heart … while also being absolutely funny and transgressive.

Shohana is a proud Muslim queer woman of colour. She is a current cast member of The Second City Touring Company, and is the recipient of the 2020 Queer Emerging Artist Award at Buddies in Bad Times Theatre. She has performed in comedy and theatre festivals across North America with her award-winning troupe Not Oasis (2017 The Toronto Fringe Patrons Pick, NOW Critic’s Pick). You can read Shohana’s short stories in The Vault magazine, Broadview magazine and Living Hyphen, and you can listen to her podcast “Finders Grievers” on The Sonar Network.