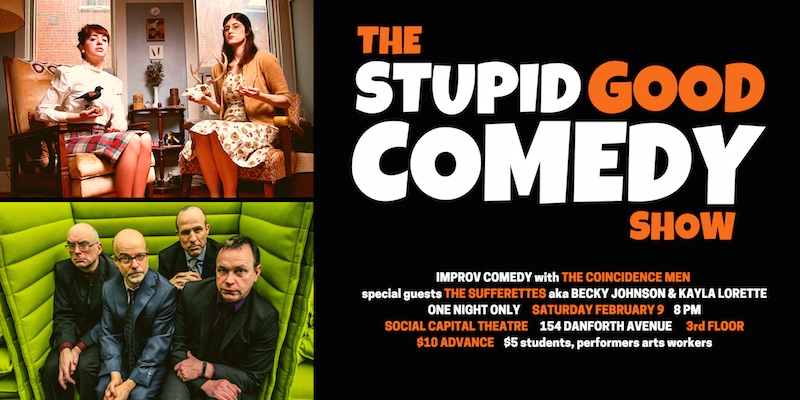 Where: The Social Capital Theatre, 154 Danforth Avenue
When: February 9, 2019 at 8pm
Cost: Tickets $10 advance at www.stupidgood.eventbrite.ca. Discount tickets are $5 at the door for students, arts workers and performers.

About: One night only of Improve Comedy! NOW Best of Toronto and Canadian Comedy Award-winning The Sufferettes on the same bill as The Coincidence Men…who will be joined by special guest Lisa Merchant!

Making comedy, theatre and sometimes other things – the Sufferettes are Becky Johnson and Kayla Lorette. They began performing together in 2008 as part of the weekly competitive improv show, Catch23 Improv, in Toronto. In 2011, the duo began touring internationally performing in such cities as London, Berlin, Vienna, Graz, Ljubljana, Sarnen, Bochum, Karlsruhe, Edmonton, Rochester and more. With multiple television appearances and credits from The Second City, they’ve shared in awards for the web series “Space Riders” and a Dora nomination, but still find time to confirm that life is suffering. Not to be missed!

With 100 years of collective comedy experience between them, The Coincidence Men are Kerry Griffin, Ralph MacLeod, Gord Oxley and Marcel St. Pierre. Respected vets, teachers and coaches in Toronto’s improv, sketch and comedy “scene” since the early 1980s, they’ve been individually involved with Canadian Comedy Award-winning groups like Monkey Toast and Slap Happy and the sketch-comedy-Gemini-Award winning comedy duo Fast n Dirty. With appearances on CBC, The Comedy Network, YTV and more, they’ve been founding alumni and creative forces behind Toronto’s much-loved Bad Dog Theatre Company. All are alums of Theatresports, three of them are Second City alums, and another one founded and runs The Social Capital Theatre.